The day began with heavy mist that literally Blavand was covered in a white veil most of the morning with very low visibility. At some moment even the lighthouse could not be seen clearly.
Bird activity was not seen much, and migration was going on but most of it would be invisible. Nets in gardens were quiet.Under such unfavourable condition, the most visible migration was Common Starling and 5,200 birds were counted, which were almost the whole migration volume, with total count of 6,000 birds. Jimmy was struggling amid the mist and still counted 212 Meadow Pipits, 106 Chaffinch and Brambling, 32 Grey Wagtails and 6 Shore Larks. Out on the sea several several divers of different species were seen and a Great Northern Diver in breeding plumage was a nice treat of a bad weather day.
In the gardens only 29 birds were ringed with 9 species altogether. Goldcrest was the most ringed bird with 7 on the net, followed by 6 Song Thrushes and 5 Greenfinches. Tits were totally absent, except for a retrapped Crested Tit. Today Jimmy is leaving the station and we will see him next season. 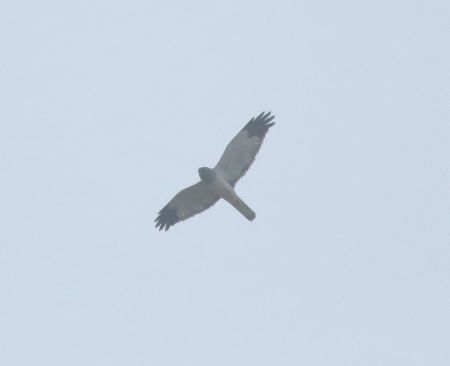